Spreading the Message of Islam

Da’wah means to invite. There are Many different ways to invite to Islam; obviously the most important is by our example. The Prophet Muhammad, [PBUH (Peace be upon him)], ‘gave’ Da’wah through his personality, honesty and truthfulness as well as direct invitation.

Let us begin with the name of Allah (S.W.T.) to remind ourselves that the sole purpose of our life, not just of our Da’wah, is to please Him. We need to remember this and continuously remind ourselves. Our intentions must be pure and free of any worldly or selfish benefit including ‘Ria’ (showing off) Insha’Allah.

“Do not underestimate the greatness of this work This Is The Work of The Greatest Human Beings That Have Ever Lived On The face of this Earth! …The Prophets of Allah [PBUT]”

Allah (SWT) gives us some information in The Qur’an, where He says (translated):

“And let there be (arising) from you a nation inviting to all that is good (Islam), enjoining what is right and forbidding what is wrong, and those will be the successful.” (Qur’an 3:104)

Allah (S.W.T) also tells us, and some scholars would say commands us:
“Invite to the way of your Lord (i.e. Islam) with wisdom and fair preaching, and argue with them in a way that is better. Truly, your Lord knows best who has gone astray from His path, and He is best aware of those who are guided.” (Qur’an 16:125)

• Wisdom
• Fair Preaching
• Arguing in a better or The Best way

Famously, The Prophet Muhammad (PBUH) has said (translated) ‘Convey from me, even one verse.’ (Al-Bukhari).

Conveying the message therefore does not necessitate a high level of knowledge but we must know our limits.

According to most Scholars one of the few reasons that allow us to live in a Non-Muslim land is to give Da’wah! 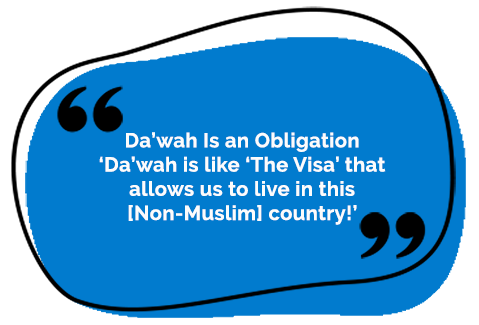 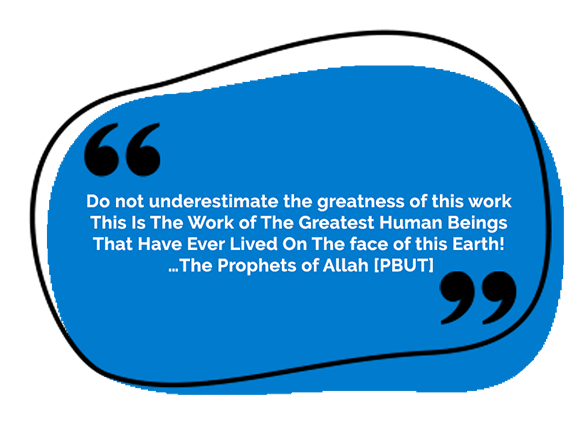 What If I Don’t Invite and Hide The Truth?

The obligation is further emphasised by the following in the Qur’an:

“Verily, those who conceal the clear proofs, evidences and the guidance, which we have sent down, after We have made it clear for the people of the book, they are the ones cursed by Allah, and cursed by the cursers.” (Qur’an 2:159)

This tells us that hiding knowledge (possibly by not conveying the message) causes Allah’s curse to descend on such people. That’s serious!

“Whoever hides knowledge, Allah will brand him with the branding iron from The Hellfire.” (Ahmad, ie. Ahmad’s collection of Ahadith)

What will I get through Da’wah?

Allah (S.W.T) tells us in The Qur’an (translated):

“And let there be (arising) from you a nation inviting to all that is good (Islam), enjoining what is right and forbidding what is wrong, and those will be the successful.” (Qur’an 3:104)

We learn from this verse and from the Sunnah of all The Prophets (PBUT) that the one who takes on this great work and calls to Islam will be successful. Success both in this world and in The Hereafter.

The Prophet Muhammad (PBUH) has told us [translated] that:

“He who calls others to follow the Right Guidance will have a reward equal to the reward of those who follow him, without their reward being diminished in any respect on that account.” [Sahih Muslim]

The above Hadith tells us that if somebody becomes a Muslim through our efforts, and Allah’s guidance Insha’Allah, then any good actions they do will result in a reward for us, as well as for them!

Imagine then that person has a family who also practice Islam or invite others like friends to Islam, this goes on for several generations. The scholars tells us that every good deed done by every person who became a Muslim through that one person, would result in a reward for us, Insha’Allah. (Wow! Isn’t that amazing! ).

“And who is better in speech than he who invites to Allah and does righteous deeds, and says I am one of the Muslims.” ( The Qur’an 41: 33)

The Prophet Muhammad (PBUH) further told us [translated] that: “By Allah, If Allah Were To Guide One Man through You It Would Be Better For You than the Best Type of Camels” (Al-Bukhari & Sahih Muslim)

About Dawah is Easy

Dawah is easy is a team of concerned Muslims, from a wide range of ethnic backgrounds, united by: our belief (Tawheed), with conviction in the Qur’an (being the last revelation from Allah to mankind revealed to his last Prophet Muhammad (saws) and the Sunnah (injunctions, laws and practical examples of the Qur’an in action) of the Prophet (saws), and the rightly guided Predecessors (the Companions of the Prophet (saws) and successive generations).

Scientist Atheist Converts to Islam | YOU will cry | “Live” – Part 1

Scientist Atheist Converts to Islam | YOU will cry | “Live” – Part 2

The Prophet (ﷺ) said, "The best among you (Muslims) are those who learn the Qur'an and teach it."

The Prophet (ﷺ) said, "He who loves my Sunnah has loved me, and he who loves me will be with me in paradise." [Tirmidhi]

Spreading the Message of Islam

The website, www.dawahiseasy.com has been started just for the sake of Allaah, so that people all around the world benefit from authentic Islamic materials and acquire the correct knowledge, based on the understanding of our righteous predecessors.